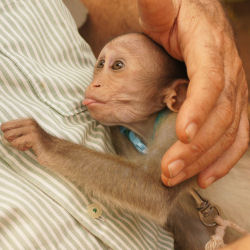 Dennis was brought into us as a tiny baby. He had been confiscated by the forestry department as an illegally kept pet. He would have been bought to be used for begging from tourists. His mother would have been killed, in order for a baby of this age to be separated from her.

He was bottle reared here and given 24 hour care for many months, before being slowly integrated into an outside pen. When Dixie arrived he was no longer the youngest baby but they quickly made friends and they now share a pen with two older females. Dennis as a young male is very confident and can be a handful, although once he knows you, he can also be sweet and charming, for a while at least!

The Primate Trust was founded by Jo and John Hicks (the same founders of IAR) it provides long term care to orphaned, abused and injured primates. This work is essential due to the loss of natural habitat, human conflict causing an increasing number of injured and orphaned monkeys. Other monkeys are rescued for being illegally kept as pets and for begging, often in appalling conditions.